Breadcrumbs started in college as an entrepreneurship class project called Sticks and Stones. The pitch was: Google Maps and Yelp made it easy to find businesses and landmarks, but hard to find unnameable things like scenic overlooks, deep water cliff jumps, skateboarding spots, and the like. 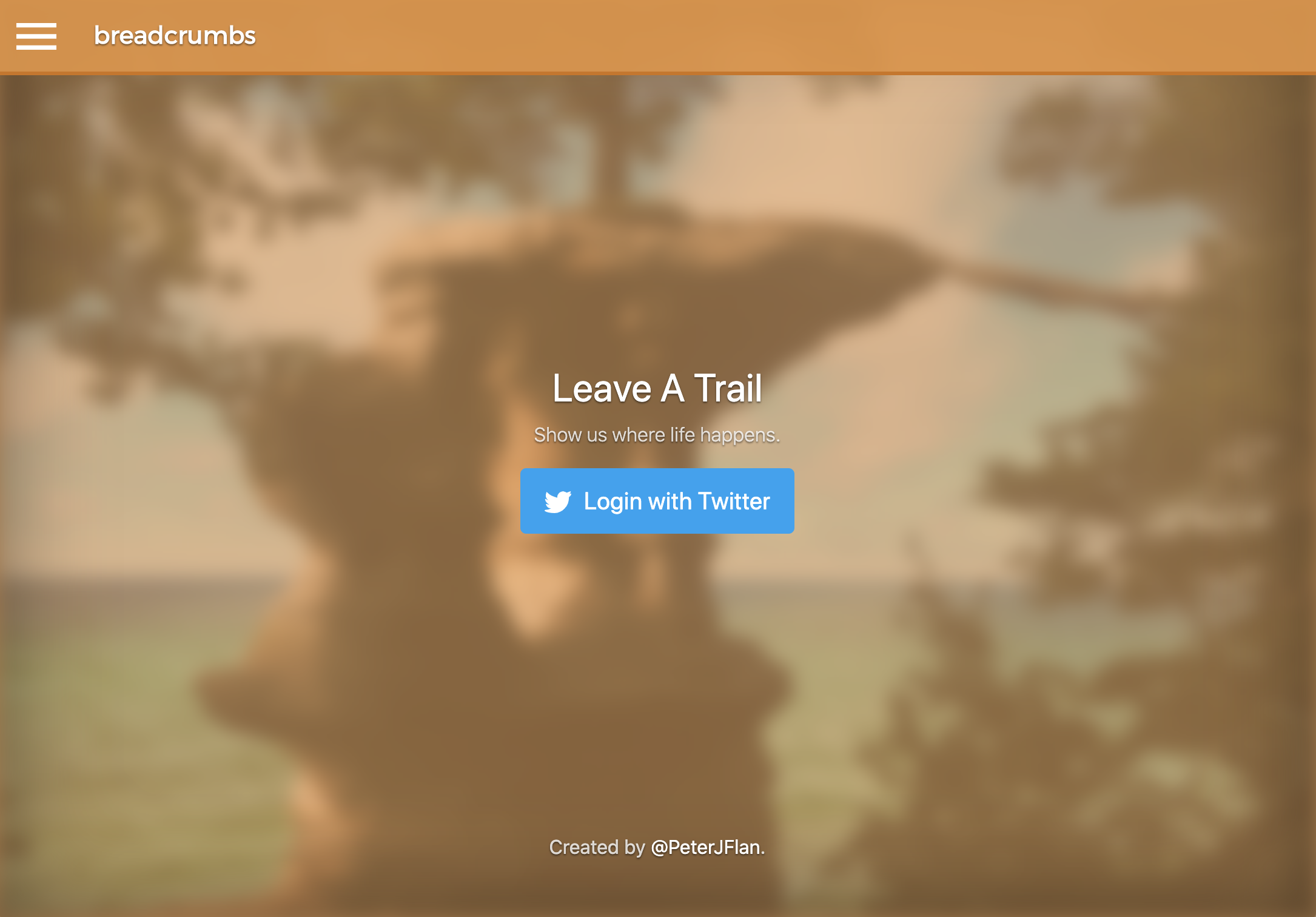 My need for this came from my desire for existing tools like AllTrails to be more specific. I wished the trail map had markers for scenic points. I also wished there was an easy way to share running routes before having actually gone on the run, or share rollerblading routes with comments on good plazas to stop in and roads to avoid.

We ended up going with a different project, as we realized this was too general a tool for people to know how they'd want to use it. We also we'rent sure that everyone wanted their favorite park bench or forest hideaway made public, some things like that are meant to be kept secret and discovered on your own. I decided to work on it on my own. 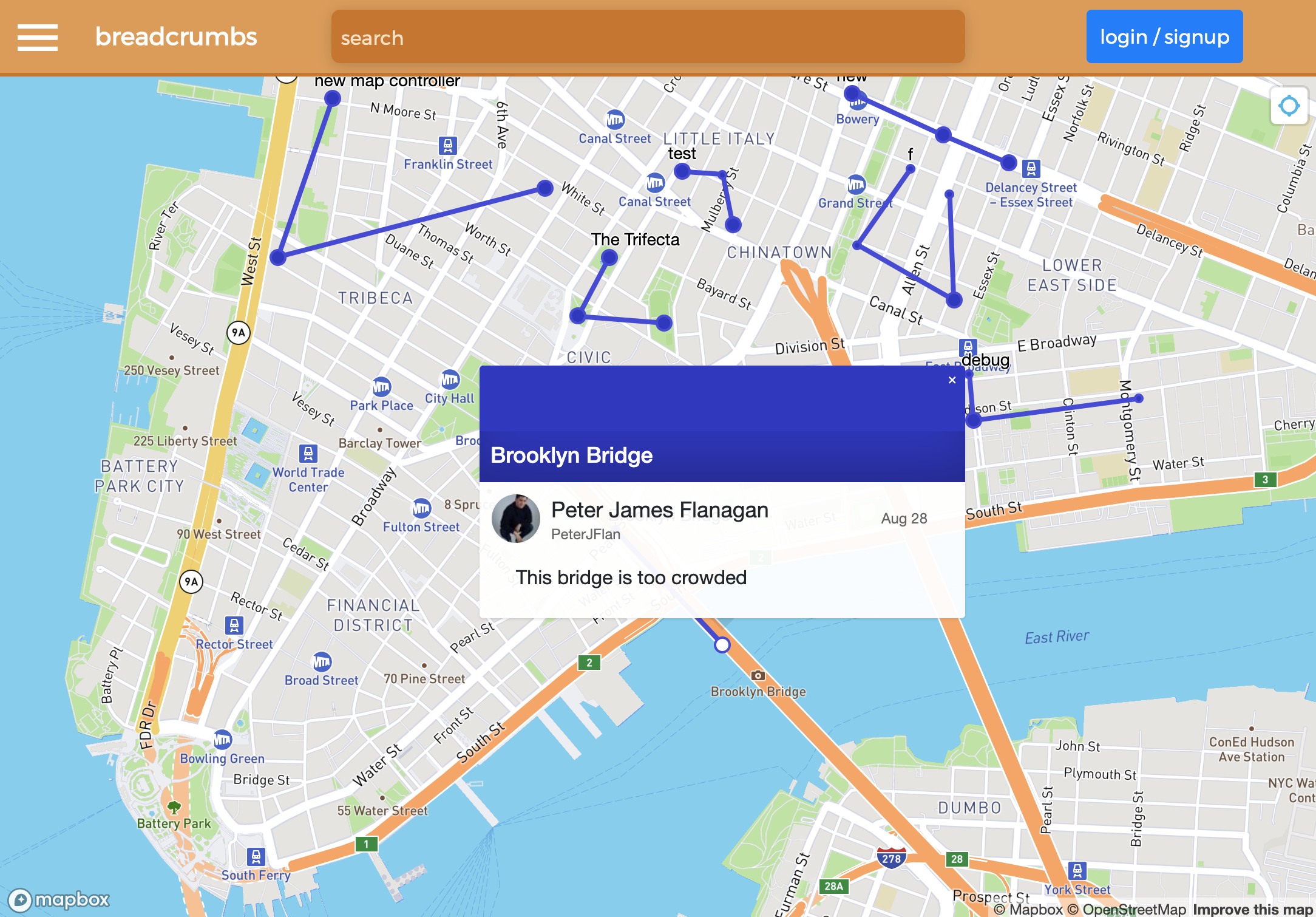 Users can go onto Breadcrumbs to see a map with user added lines and points. 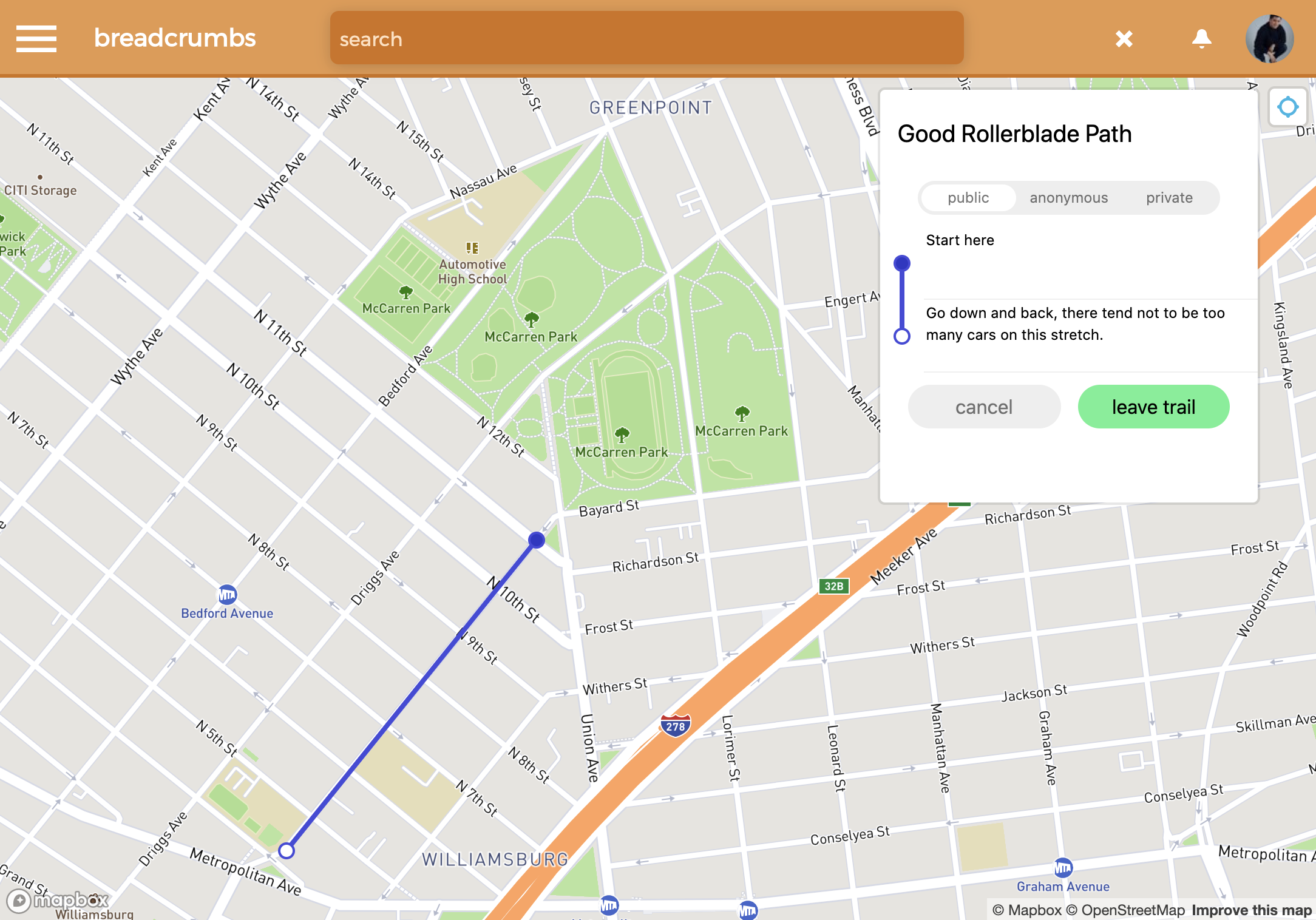 Logged in users can draw and add new points themselves.

But this didn't stop me from thinking about it. I LOVE maps, they're a good way to share information and they're fun data visualization tools. Tech is best used to enhance real world experiences, not replace or even augment them. I'd love to build an app that does that. What other ideas could be created from Breadcrumbs?

One issue with Breadcrumbs is that it was not tailored to anything. Apps like Mountain Project and AllTrails, while not specifically map first UIs, still use maps heavily to improve the experiences of these hobbyists. I could create a map app for something specific I enjoy.

This project could work better as a rollerblading tailored app. Users can click segments of roads to rate the quality of its pavement, comment on road safety, as well as add points with pictures of features. By tailoring itself to a specific use case, I could then develop more unique features. Breadcrumbs, which would have to be renamed, could then ensure that it has an audience that would find it useful.

I'm a big fan of the NYC Stooping Instagram account. Followers submit pictures of furniture that people are throwing out on street corners with a location and stooping reposts them to their story. Then if you see one near you that you like, you can race out to find it and pick it up. I've seen many things I like on stooping, and have sometimes managed to make it there in time to pick them up.

I think stooping is a fun part of city culture, and an excellent means of conservation. However, I do have a few issues with the current system that I think could be improved:

I think all of these could be addressed by a Breadcrumbs style app. I often see furniture that I would have loved to collect that's far out in Brooklyn or Manhattan. I realistically can only pick up things I can carry, fit on a subway, or walk to my apartment (maybe 1 mile tops). It would be way easier if I could view these posts on a map.

The other issue is that all of this is managed through a single account which needs to manually repost submissions. Now obviously this is someone else's project, and I don't have to worry about the time it takes them to make these stories if it is something they enjoy doing. But I do think more furniture can be reported and then picked up if there was a website that allowed people to post and view stoops themselves. This would also allow people to comment when things are gone as well.

Breadcrumbs might have been asking too much of itself. Perhaps it shouldn't be a one stop shop for finding out what's going on in an area, and instead be a tool for sharing what an area has going on. Breadcrumbs could drop the social feed, following other user accounts, drop the likes and comments and just focus on making map augmentation and sharing easy.

Historical societies could more easily make maps with landmarks and comments, backcountry skiers could show off a new trail they discovered, or club runners could map a route before they send it to the group.