A short story about tech and the pandemic

One hopeful do-gooder was Axel Morrison, a tall, skinny, and unbearably memorable young entrepreneur. He was well dressed, to set himself apart from the other tech startups that embraced casual. Axel was a nickname given to him by his college design team, and he took it with him after dropping out. He felt it made him look quick, which was invaluable in an ever-changing Silicon Valley. Since leaving school, Axel had tried his luck starting a few tech companies but to no avail. He remained undeterred, for he knew failure bred experience bred success.

He saw the effect The Disease had and sympathized with the mass joblessness of the Bay Area. Axel, as he trained himself to do at every opportunity, saw an opportunity. People wanted their lives back, Axel wanted to give it back to them, and Herd Immune was how.

Axel put together a team, who put together a website, where people could register test results for The Disease. Users that registered a positive antibody test would receive a publicly accessible "badge of immunity," a purple shield with bull-like horns and a big medical plus in the middle. The badge proved the bearer was ready to rejoin the workforce. Anyone could use the site, get a badge, and join the herd, for free.

Within a few weeks, people from all over California had been tested and registered with Herd Immune. Rideshare companies displayed the badge of immunity on drivers that had received them. Jobseekers attached their Herd Immune certificate to the top of their resumes. Restaurants and businesses boasted a Herd Immune certified staff, which required the whole staff to have badges and a small, fair, processing fee of $100 to make it official. 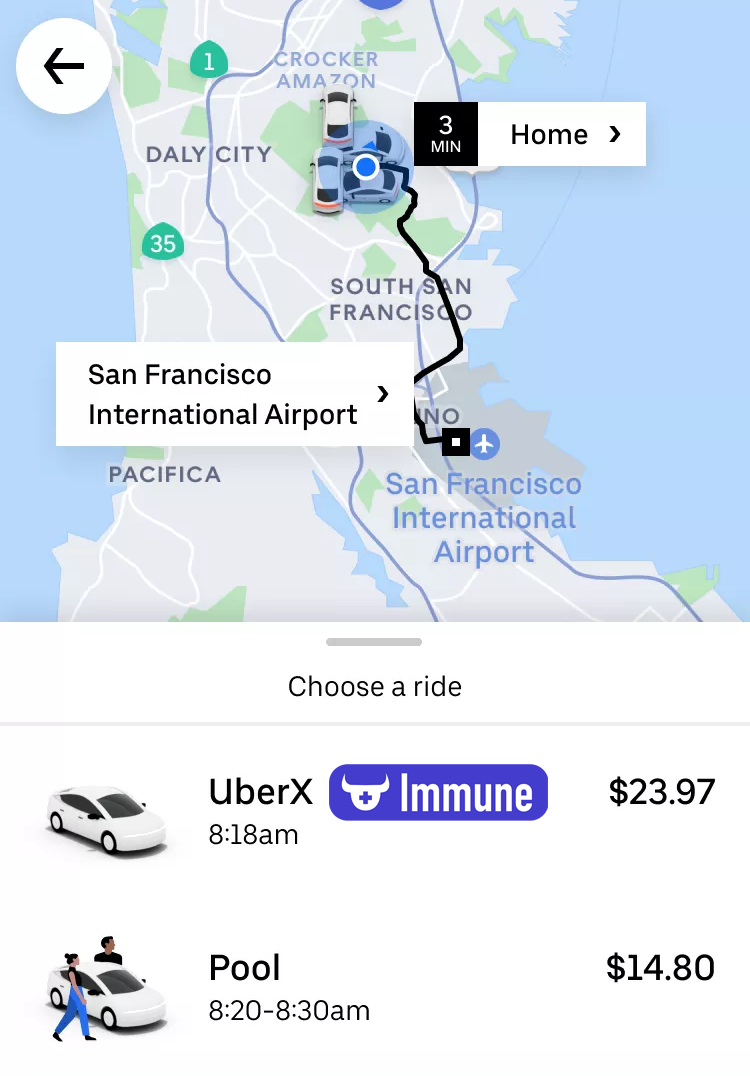 John Briskman hadn’t worked since the first day of stay at home orders. His barbershop had been closed for weeks. He didn’t fear what The Disease could do to him, he feared what stopping The Disease would do to him.

His business had been open for several years now but was never more than a few red months away from closing its doors. If long hair became commonplace in men’s fashion, he was done for. When The Disease first struck, the fines for staying open would’ve bankrupt him immediately, staying closed would only bankrupt him slowly.

John couldn’t stand lockdown either. He enjoyed staying busy, so staying home was draining. Being a barber meant he was used to having a fresh haircut, being at home meant he couldn’t have that.

At some point, his sticky little elementary school kids brought The Disease home with them, and soon the whole family had it. When John did catch it, it was easily the worst fever in his 36 years. But it didn’t kill him, it didn’t kill anyone he knew, he never imagined it could.

John registered with Herd Immune as soon as he found out about it. It was still too early for barbershops to reopen, indoor businesses like his were part of Phase 2, it was still Phase 1. But he was eager and went back to the shop to hang his purple Herd Immune Cert.

Within a few days, he was getting calls asking for hair appointments. He had no choice but to tell them, "soon." He hoped it would be soon. 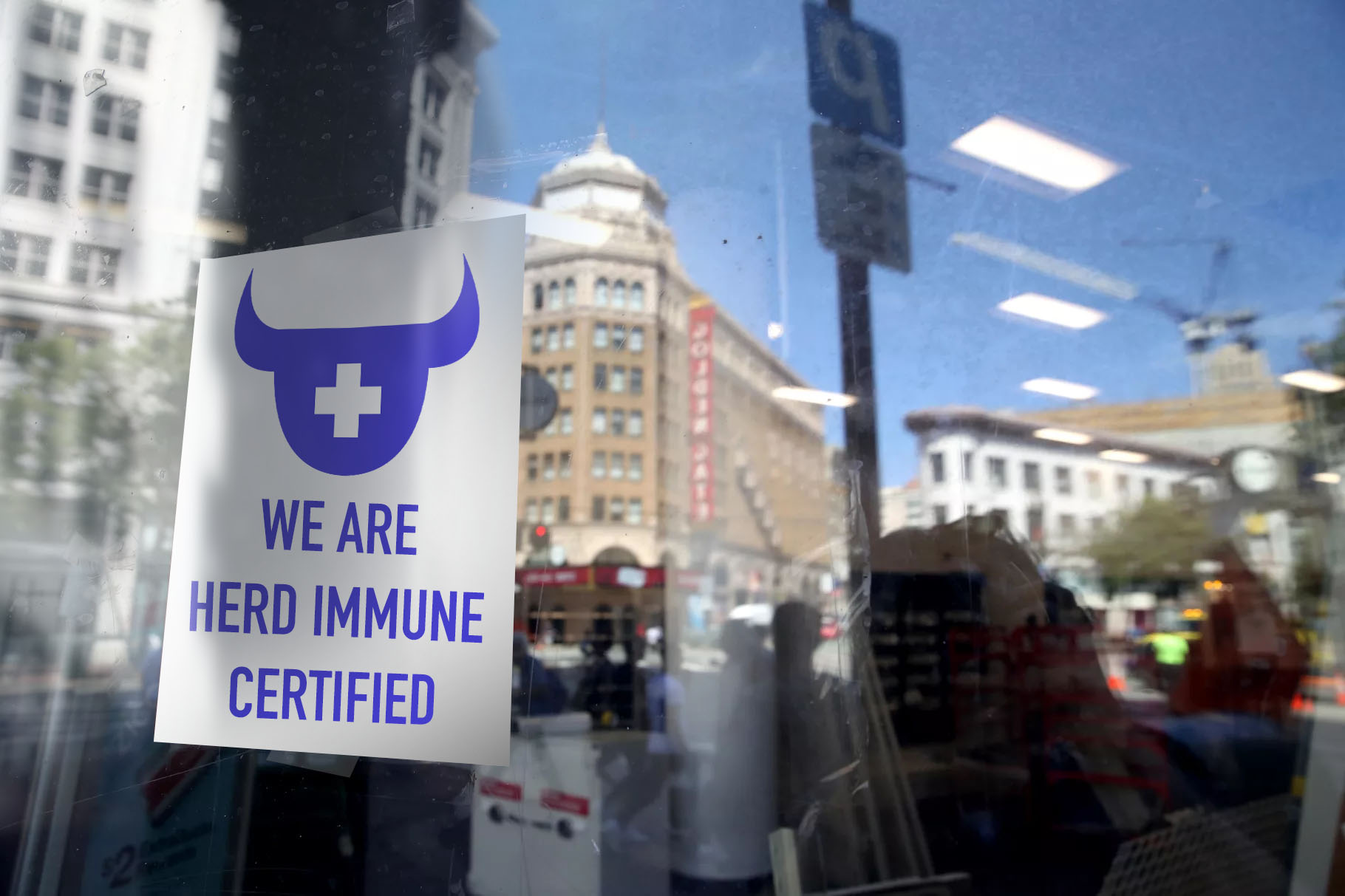 Ali Ralph was bored. She was relieved to spend time working from home at the beginning of it all, excited even. It had gone on for too long now. She felt like she was wasting her twenties.

She did two weeks’ worth of groceries in one run if she could. She enjoyed time in her backyard and avoided public parks. She wore a mask when she ran, which was less and less often. She ordered out once a week as a treat but didn’t enjoy putting herself or the delivery driver at risk.

Now they were allowing people to eat outside, and it was tempting, the weather was nice. But Ali couldn’t get herself to do it, not even at her favorite Thai place. She didn’t want to risk it.

One day on the way home from groceries she spotted a big purple badge. It was hanging in the window of a restaurant she often passed but never tried before. It said the staff was all Herd Immune. She looked it up as soon as she got home. Soon Ali was seeing it everywhere. A bookstore she hadn’t been to in months had one now. Cafes, barber shops, and grocery stores all up and down her street seemed to have the purple horned shields posted. 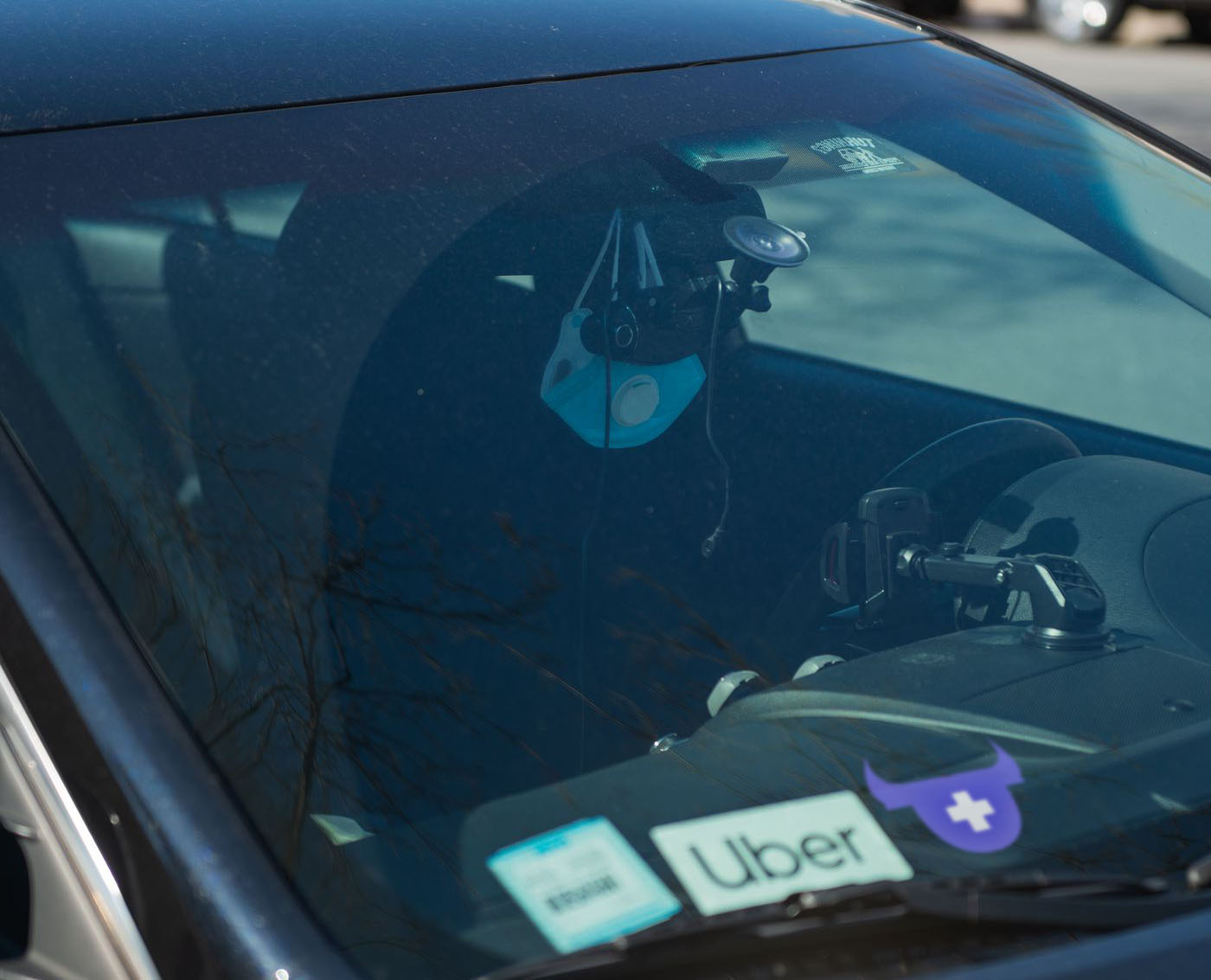 Josephine Taylor had been unemployed for several weeks, which was several weeks longer than she could afford. She was told she was essential at one point months ago, that her being at the grocery store was necessary for the safety of the public. After the first few weeks of confusion, the only way work had changed was a surgical mask had been made part of the uniform and the checkout aisles had hand sanitizer. She had been as careful as she could to avoid The Disease.

She did not know what Herd Immune was until she first noticed a lack of customers coming through the store. Down the street, another grocer had been Herd Immune certified. So, the manager of Josephine’s store did as all businesses have to: compete.

In order to earn a Herd Immune badge, the whole store had to test positive for antibodies. Seeing how customers were more essential to the business than her being employed there, the decision was made to let Josephine go. The store received a certificate the following day and had a banner flying before the end of the week. It read: "100% Herd Immune Certified Staff."

Having a job was now more important than ever, and Josephine couldn’t afford not to have one. She tried her luck at Uber driving, but the gigs were rare for people without a badge. She applied to restaurants, but none were willing to have a dishwasher cleaning plates that wasn’t Herd Immune. There was no place left that would take her. The stimulus checks had stopped coming. Rent was still due.

She had no choice but to make herself hireable. She needed a purple bull shield. She drove to the hospital. 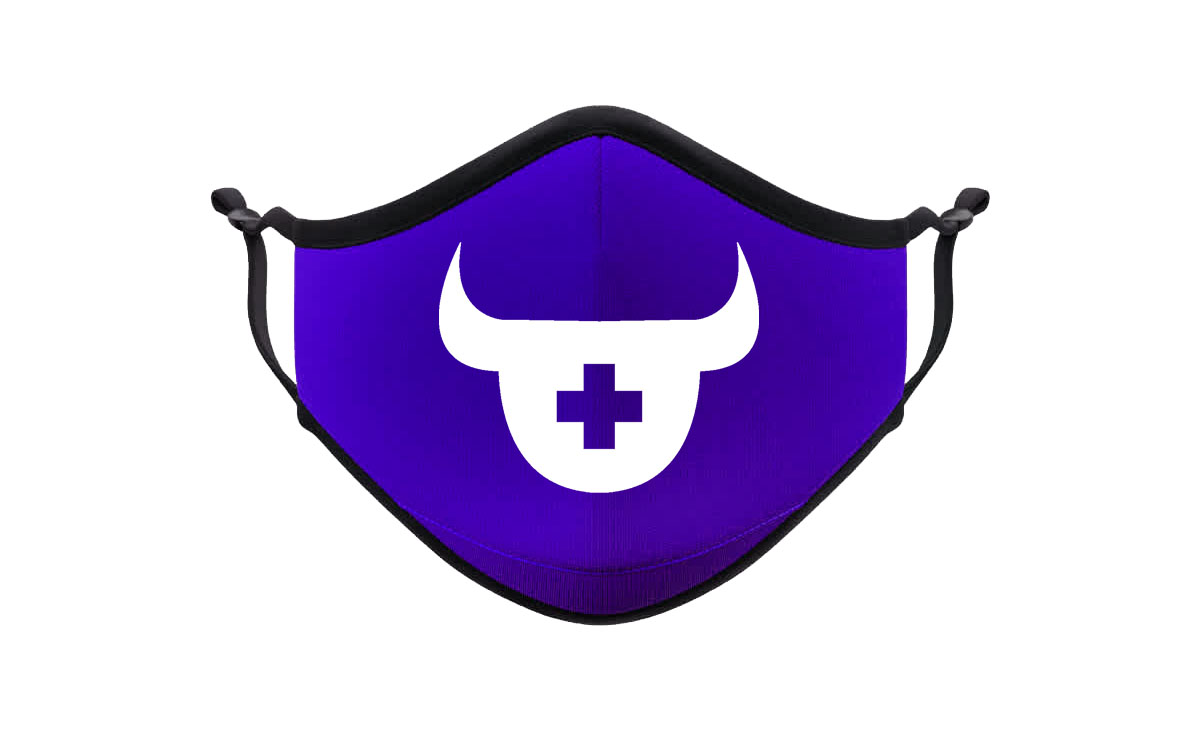 Things hadn’t been as bad since the first few weeks of The Disease, thought Dr. Rivera. She had already been desensitized to all the death. She saw patients she thought would live, die. She saw patients hanging by a thread make miraculous recoveries. She felt like she played little role in either result. She just brought out the breathing machine when a patient sounded bad.

The first wave was over, and Dr. Rivera hoped that there wouldn’t be a second. But she never let her hope cloud her judgment and knew now that wave two was upon them. She mindlessly unhooked a patient that had passed and went to clean the ventilator for a new patient. While pulling the covers up over her face, she realized she recognized the woman.

A few weeks earlier a woman had entered the urgent care, but without any sense of urgency. Maybe she was confused, maybe she was looking for someone, but she paced the lobby and the waiting room for as long as she could before being approached. She was asked to put on a mask and was offered help, but instead, she left. The hospital was too short-staffed to send someone after her, and the busy ICU doctors resigned to leave it a mystery.

Once again, Dr. Rivera wondered what the woman was there for that day. For a moment she pondered it, but she quickly moved on, another patient needed her care. She filed the woman, Josephine, under "T" in that day’s bin, and went to clean the ventilator.

The Disease was much worse than Dr. Rivera had first thought. Her next patient was a man who had contracted it before and had just contracted it again.

At the beginning of the pandemic, I saw this tweet by a tech entrepreneur and was immediately put off. I felt like it can be dangerous for tech entrepreneurs to insert themeselves into situations they lack expertise in, public health for instance. Ideas like this prioritize work as a means to survive, which, in week two of the pandemic in the US is not where I think our minds should go. 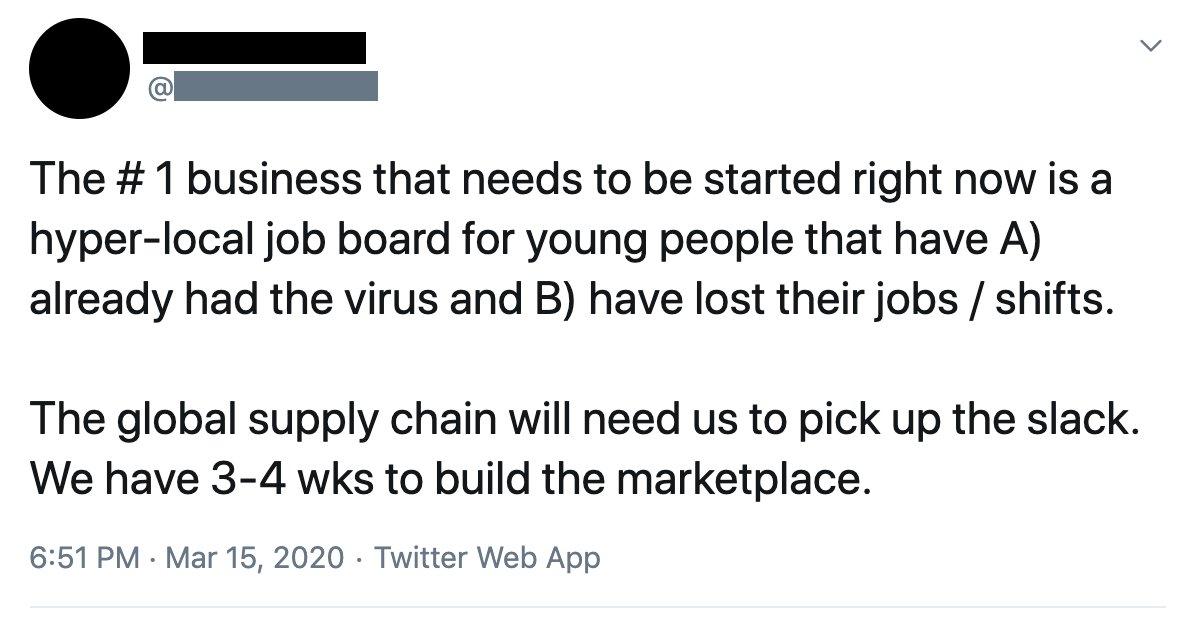